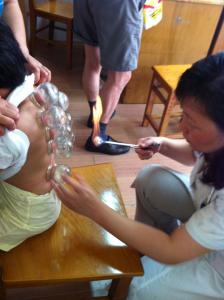 Ing and Ronan were in Traditional Chinese Medicine (TCM), Lai Yan was in endocrinology, Monica in surgery and Naomi spent the week in haematology.

TCM is a complex speciality, comprising of acupuncture, traditional internal medicine and ‘ba huo guan’ ie cupping- made a brief trend in the West by Gwenyth Paltrow. We learnt the basic principles of ‘ying’ and ‘yang’. If we think of ourselves as primitive 4 legged mammals, the TCM theory is that the front of the body that would face the ground is the ‘ying’, the dark element, whilst the back would face the sun and be the ‘yang’, the light component. Furthermore, the anatomical map in acupuncture is based on this theory, with certain points of the body holding a great medicinal significance.

TCM is not a topic that we would have had a great deal of knowledge about and thus we were enthusiastic when presented with an opportunity to gain some insight. It can be used to treat a vast array of conditions such as asthma, bells palsy and prolapsed lumbar discs to mention a few. Patients returned on a daily basis to the department for treatment and as we progressed along we noticed improvement, especially with stroke patients. During this short period in the department we formed our own opinions and impressions of this approach to medical treatment. One week in the department was not enough to experience and grasp the history of TCM. One student with a Chinese background and experience in TCM was able to have a greater appreciation of what was going on while other students found it difficult to grasp the entire concept and failed to get a feeling for it. However on the whole we felt that it was useful to have seen the improvement in patients’ outcomes during the placement and we recognized it as a specialised skill.

During week 2 we attended the endocrine department of Zhongda hospital and found the experience to be fulfilling and rewarding. We had a particular interest in diabetes and wanted to enhance our clinical skills and knowledge in this area. Our first impression of the unit was that it was overcrowded in comparison to similar units in Northern Ireland. We noticed that more patients were being treated in this department on a daily basis compared to home. Diabetes in the Chinese healthcare system is becoming an epidemic. The majority (90%) of patients on the endocrine ward have diabetes and for this reason it is commonly referred to as the “Diabetic Department.”

Due to the fact that patients must pay for a portion of healthcare in China, many cannot afford to attend the hospital and usually present late, with an array of complications.

During this placement we attended a ward round each morning. Although it was in Chinese the post-graduate interns translated for us and we were able to understand the diagnosis and treatment plan for most patients. Overall, we feel that clinical examination, investigation and management of patients on the endocrine ward are much the same as what we have encountered at home. However, resources are restricted in Zhongda hospital and there is a much more demanding patient workload. This may be overcome by the opening of the new hospital next year.

This week we spent 3 days in Xi’an. This was a 36-hour round-trip journey on a slow train from Nanjing. We cannot stress how crowded the train was. Many stood for the entire way and one man was even lying on the floor wrapped in newspaper. Although the train journey was next to unbearable, the trip to Xi’an was completely worthwhile. It is an amazing city and we were able to see the Terracotta Warriors, one of China’s great tourist attractions. The pits were very impressive, however it was underwhelming due to the commercial element. Our tour guide took a real shine to a certain male member of the group, and gave him a replica terracotta warrior as a memento. We took a tandem bike ride around Xi’an city walls, which was thoroughly enjoyable. We also appreciated the view of the city from the bell tower. Xi’an is a very tourist-friendly, westernised city with a wild nightlife and cultural heritage. It is well worth a visit!