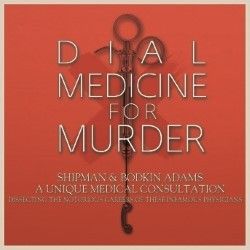 Dr Harry Brünjes, Vice President of the College of Medicine is co-starring, for a second year, in the Edinburgh Fringe play Dial Medicine for Murder. If you are going to Edinburgh this year, we hope to see you there!

This is the story and juxtaposition of the two most notorious British physicians of the 20th Century, Dr Harold Shipman & Dr John Bodkin Adams. The production will compare and contrast the background, arrest, trial, legacy and psychopathology of both individuals interspersed with film footage and contemporaneous news items. ‘Dial Medicine for Murder’ will be presented as a consultation with Dr Harry Brunjes & Dr Andrew Johns who first met as medical students at Guys Hospital followed by careers in general medicine and forensic psychiatry respectively.

The production was one of the great successes of the Edinburgh Fringe festival in 2015 and is returning again to The Gilded Balloon this summer on August 24th – 26th.