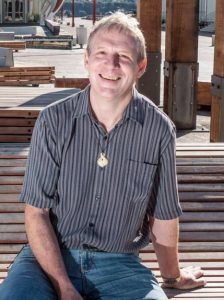 Dr Robin Youngson gave a talk at the University of Westminster, in association with the College of Medicine.  Describing the importance of compassion in healthcare, he brings together the evidence from neuroscience and clinical trials which indicates that compassion is not only right, but also medically and cost effective.

He also argues from the neuroscientific evidence that there is no such thing as ‘clinical detachment’ and that NHS staff who show compassion cope better and burn out less easily.

Full references can be found in his book, A Time To Care.

Listen to the whole talk

‘Clinical detachment does not exist’

The neuroscientists are telling us that what we learned at medical school about clinical detachment does not exist, that we are intimately and profoundly connected and I’m going to mess with your minds during this lecture and cause some reconnections with your brain.

…So this idea of detachment has to be challenged in the face of modern neuroscience. If we take a hundred medical student with poor diets and randomise them into two groups and one has therapeutic touch and the other doesn’t at the end of a month the group that has had the therapeutic touch will have a higher haemoglobin level than those that don’t. There are all sorts of extraordinary studies and these are randomized controlled trials published in reputable journals.

If I hold my hand close to David [in audience] if you had put an ECG electrode on me and an EEG electrode on his brain you would discover that some of his brains cells are firing in synchronicity with my heartbeat, and if you did the converse you would find some of my braincells were firing in synchronicity with his heartbeat – and for that you don’t have to touch, you just need to be close.

The electromagnetic impulse of the heartbeat extends far beyond the body and influences others. Traditionally the heart is thought of as the seat of the emotions and now we’re discovering that the heart has an extensive nervous system – there are something like 40,000 neurones and the heart is a sensing organ. I was taught that the brain stem influences heart function – well actually the heart affects mental and brain function.

There’s a state called physiological coherence which is associated with mindfulness and presence and compassion where the heart is influences the brain function in a way that makes you very open and sensitive and empathic. What I’ve learned as a practitioner is that it’s extremely important that I’m careful about the thoughts and the feelings that I bring to each patient encounter. If I bring busyness or grumpiness or resentment or judgement then those feelings are profoundly affecting the physiology of the patient within minutes. That either has the capacity to heal or harm.

I want to tell you how big that effect is. The emotional and psychological and social and spiritual state of a patient has a profound influence on clinical outcomes and I want to give three examples.

A very large study, 999 Dutch elders who had survived a heart attack were followed up for 10 – 15 years – most of the rest of their natural lives. About a month or two after their heart attack they were given a questionnaire which asked about their thinking style and their degree of optimism or pessimism. And they were divided into four groups the most optimistic and hopeful and the most depressed and anxious, and they tracked their mortality rate. And the mortality rate from all causes, not just the cardiovascular, in the pessimistic and anxious group was three times higher in the pessimistic and anxious group over the next ten to fifteen years. The mortality rate from cardiac causes was four times higher.

Second example. If you took the general public and divided them into three groups by the same sort of measure of optimism and pessimism and then give each of you the same standard dose of Influenza A virus. The rate of clinical infection in the pessimists would be three times higher than in the optimists.

One more example. If I was to randomize you into two groups – but only medical students would agree to this – if I were to make an incision in your skin and then be really mean to one group and really loving and kind to another the skin wounds of those in the group I was mean to would take twice as long to heal.

So I’m often told, Robin, it’s all very well this touchy feely stuff but get real, if you want a hip joint replaced, would you rather have a surgeon who is technically competent or one who’s a lovey dovey? And I say well the surgeon who is technically competent but doesn’t have any human skills may have several times the rate of infection, of complications, longer lengths of stay, skin breakdown. So why can’t we bring caring alongside our technical skills?

So how large is this effect? Well a meta-analysis of all the papers that speak about this effect said that the difference in mortality between optimists and pessimists is about the same as the difference between smokers and non-smokers. It’s better to be a happy smoker than a miserable non-smoker.

There’s a small but growing amount of evidence that compassionate caring saves time. A number of countries, including the UK and US have encouraged a practice called nursing hourly roams where very busy nurses in addition to all the other jobs they have to do are told that every hour they have to go and see their patients and say “My name’s Lucy, I’m your nurse for this shift, can I make you more comfortable, do you need some pain relief, do you need to go to the toilet: this is the plan for your care, is there something else I can do for you: I have the time.”

When you suggest this to nurses they throw up their hands in horror and say “look we can’t even get our shift’s work done and you’re asking us to do all this extra work?”

The evidence from many hundreds of hospitals now shows that when you do that the number of call buzzers drops by 50 – 60%. That nurses, if you put a pedometer on them, will walk a mile less per shift. Patient falls will reduce by 50%, patient bedsores will reduce by 40% – patient satisfaction will increase. But the practitioners will never go back to their old practice after a month because they are finding so much satisfaction.

Listen to the whole talk