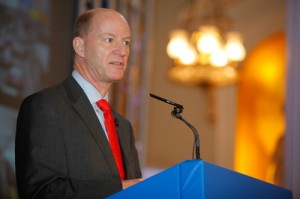 Michael Depledge is Chair and a professor at the European Centre for Environment and Human Health.

He says ‘Humans and interconnected with their environment but we seem to have forgotten that over the years.  The Centre that we set up explores those interconnections – threats and opportunities.’

‘If you put something like fish in an enclosed area away from their natural surroundings then they start doing strange things – they behave abnormally.  If you take many small mammals away from nature and keep them in a laboratory they eat excessively. Isn’t it curious then that by 2030 the World Health Organisation estimate that depression will be one of the top three illnesses on the planet and we also have epidemics of obesity.  So this the background against which we’re trying to reconnect people with nature.’

A few generations ago, it was normal for people to spend a large proportion of their day outside.  Now adults averagely spend 21% of their time outdoors, and children only 9%.  Professor Depledge has been running a series of studies which demonstrate the helpfulness of reconnecting people with their environment.  In particular he has been involved in ‘blue gym’ activities – swimming, sailing, surfing, kayaking – but also gentle coastal walks.  The centre then captures the evidence that being involved produces wellbeing – for instance by reducing the incidence of diabetes and  the number of visits to doctors.  He’s also run a recent systematic review which demonstrates that exercise taken indoors is less effective than exercise outdoors, particularly for mental health.

Their initial study was with the company Ginsters, who produce Cornish pasties in the South West.  They found that by a range of initiatives from offering salad in the work canteen to outside-work activities on allotments and elsewhere, they increased the cohesiveness of the staff body and reduced sick days.

Now he’s running a much larger study which includes the Royal Cornwall Hospital Trust, and Cornwall Council.  Currently sick average of 9 sick days a year taken by the Council’s 2,000 employees cost several millions – so the economic as well as wellbeing benefits of improved health are clear.