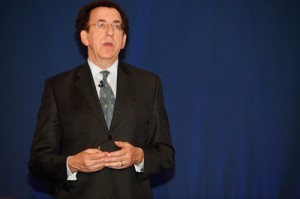 ‘Just because your mother and father and brother and sister died of heart disease it doesn’t mean you have to, it just means that you have to make bigger lifestyle changes to prevent that’.

Professor Dean Ornish is Clinical Professor of Medicine at the University of California, San Francisco as well as running his own Preventative Medicine Research Institute.  For the past thirty years he has been using the ‘high tech’ of research trials to prove that ‘low tech’ interventions in lifestyle can not only prevent but reverse the ills of the Western world – heart disease, diabetes and depression.

The keynote speaker at our 2011 annual conference, he gave an at times utopian sounding picture of how medicine could be practised: doctors who see their patients get progressively better, not progressively worse; patients who are inspired by pleasure, not fear to improve their lives; lifestyles that save the planet as well as giving better health; hospitals and healthcare givers who save millions; drugs which are reserved for conditions that really need them like HIV, malaria and TB.  And the clinicially demonstrable importance of love.

What’s remarkable about Professor Ornish’s formulation is that all the improvements he describes are the result of simple lifestyle changes – and are the way he practices medicine.  The heart of his programme is more exercise, more exposure to nature, a better diet.  He argues that much of modern medicine is ‘mopping the floor without turning off the fawcett’ – repeated bypass surgeries for someone who then goes straight home and continues to eat a diet of ice cream and burgers.  His prescription is well backed up by evidence from large clinical trials, embracing not just his home ground of California – where as he observes ‘anything can happen’, but from 45 hospitals across the United States, including West Virginia which has the worst rate of heart disease in the country.

One patient, typical of thousands on this programme, recorded that ‘I lost 50lb, in the seventh week my angina disappeared – which seemed too good to be true, my triglycerides went from 800 to 93, my cholesterol from 243 to 110, I’m no longer using a cane or wheelchair, I am no longer using diabetes medication.  Once I had diffculty getting around the house without chest pain – now I walk 2 miles a day and cycle ten on a stationery bike.’

Some patients can feel doomed by a long family history of a disease – or by seeing, for example, their prostate cancer encouraged by their gene profile.  Ornish’s research though demonstrates that genes are not fate.  Following a healthy lifestyle the proteins which turn on and turn off these genes are favourably affected – so although the genes still remain they cease to be active in the body.

Following a significant event like a heart attack, patient compliance with drug regimes can often be poor – half of all patients prescribed statins have ceased to take them after a year.  Ornish argues that this is because taking medication is fuelled by fear of death – which people don’t like to think about, and therefore both the fear and the drugs are abandoned.  Lifestyle changes, on the other hand are driven by pleasure – once someone has become used to taking exercise, this healthy behaviour becomes addictive.  Where medicine is needed, patients are counterintuitively more likely to keep taking it if they are also pursuing lifestyle interventions.

Ornish argues that at the heart of chronic disease patterns lies a second epidemic of depression and loneliness.  The number one prescribed drugs are anti-depressants. Doctors given eight minutes to see their patients are unlikely to find the central emotional triggers behind addictions from cigarettes to overeating to excessive computer gaming.  Yet this can be a crucial factor not just in wellbeing, but survival.  Heart disease patients are five or six times more likely to die in the months following a major heart attack if they are depressed.  Similarly women with metastatic breast cancer were shown to live on average twice as long as the control group when offered one 90 minute session each week talking to other women confronting the same problems.

Professor Ornish says that the best predictor for recovery from chronic disease has not been age or state of health on presentation, but rather how well patients stuck to lifestyle changes. Change is hard, but Ornish says he frequently hears patients saying that their heart attack was the best thing that happened to them – transformative suffering that made them value, improve and finally appreciate their lives more.  For doctors, he says, pursuing lifestyle approaches means that they can reclaim their role not just as technicians, dishing out pills, but as healers, able to guide patients back to greater health.