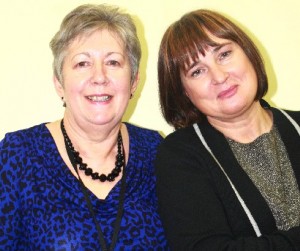 Our autumn First Thursday Lecture held at Guys hospital /Kings College London on 7th November was attended by over sixty people from a wide range of healthcare professionals: GPs, nurses, complementary therapists, students, patients, carers and members of the public.

Jane McGrath spoke about her personal experience and her journey to recovery, which she described as from Bedlam to Kerala – her talk held everyone’s attention and often you could hear a pin drop.

Jane told how she had been part of a very long and complicated NHS complaints process that was finally overseen by the parliamentary and health care ombudsman and led to a 22 point apology. She described the process as just like pulling teeth. Talking about her own mental health she said she recognised that she needed to take action to help herself recover when she realised she had been reduced to a diagnosis and was no longer being seen as a person. Due to the ongoing poor level of care she withdrew from the NHS, devised her own care plan and delivered her own recovery from home. This included going back to into education – first qualifying as an aromatherapist and reflexologist then achieving an MA in digital media arts. She also became vegetarian and reconnected with nature, ran two half marathons and travelled around India. She refused to see her condition as permanent and herself as “sick” – she saw no benefit in surrounding herself with other people’s distress. She also became an active service user representative and worked on many NHS projects.

She was later awarded a Millennium Award for community work and in 2012 a Winston Churchill Bursary. This was to fund a seven week trip to Kerala in India to make a documentary about the many ways that people recover from mental distress outside of the allopathic model; thIs is currently being edited. She showed some wonderful clips demonstrating different approaches – such as Ayurveda. Jane feels that her documentary may be of great value in helping the NHS debate mental health recovery and how and why it happens. There were learning points around healthy doctors, aesthetics of the recovery space, healthy diet, respect and patient choice.

Jane continues to work in close partnership with the NHS trust that originally failed her on recovery projects and they are currently supporting her PhD studies in co-designed recovery pathways.

Here are some quotes from those who attended

”seeking out your own care plan is admirable and inspiring”