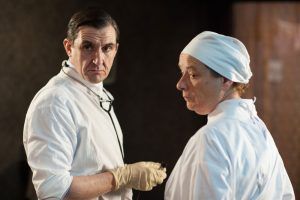 Join us for an evening with Call the Midwife doctor Stephen McGann on 17th November – full details here.

Stephen McGann has worked as an actor in British film, TV and theatre for more than thirty years. He currently stars as Dr Patrick Turner in the hit BBC period medical drama Call the Midwife – set in a poor district of East London during the early years of the NHS. Turner is an overworked but enthusiastic GP working on the front line of post-war urban health. He’s frequently challenged by the cases he meets, knows bitter failure as well as success, and is scarred by painful past experience. Yet his patients love him, and he’s energised by his compassion towards them. In short, he’s an ordinary human being doing something extraordinary for the benefit of others. Turner is the doctor we all wish to have: a familiar face in which we might recognise the better part of ourselves.

Does the huge popularity of a medical drama such as Call the Midwife tell us something more about the hunger our society has for medicine with a truly human face?

Call the Midwife is hugely successful – playing to ten million viewers every week, and selling to over two hundred territories worldwide. So what’s the secret? Is this fictional doctor simply a meaningless dramatic confection constructed for popular TV entertainment? Or does the huge popularity of a medical drama such as Call the Midwife tell us something more about the hunger our society has for medicine with a truly human face?

In this talk, Stephen discusses how a character like Dr Turner is created for TV. He’ll explain how Call the Midwife sources its authentic medical stories, and how the production ensures the medical accuracy necessary for credible drama. He’ll also describe the massive impact and positive health outcomes these medical stories have had in the real world. Yet Stephen will explain why he thinks procedural accuracy is only the starting point – and why the most important work he does involves showing what is uniquely human about his doctor, rather than what makes him identifiable as a medic.

He’ll argue that the most effective medicine a doctor possesses – whether real or in drama – is administered by their humanity, as well as their expertise.